Meet the Only Female Pilot in the Red Bull Air Race

Melanie Astles made his in 2016 becoming the first female pilot to compete in the prestigious Red Bull Air Race. The French pilot took time out of her busy schedule to speak to Sportette about her inspirational climb to the top.

How did you get into flying? Was it always your dream to become a pilot?

My love for planes dates back to my early childhood – as far as I can remember. As young as 7 or 8, I wanted to become a fighter plane pilot.

Although I was a good student in school, I was not interested in the school syllabus. I quit school when I was 18 and worked gas stations throughout France. One of these stations happened to be near an airfield, so at age 21, having saved a bit of money from working, I took my first flying lesson.

What were some of the hurdles you had to overcome in your pursuit to become a pilot?

In the early stage there was a lack of encouragement from people and family around me, as they wanted me to study and get a “normal” career – only a few women were in mechanical sports, let alone aerobatics. I also did not have the appropriate education level and diploma to enter a flying school. 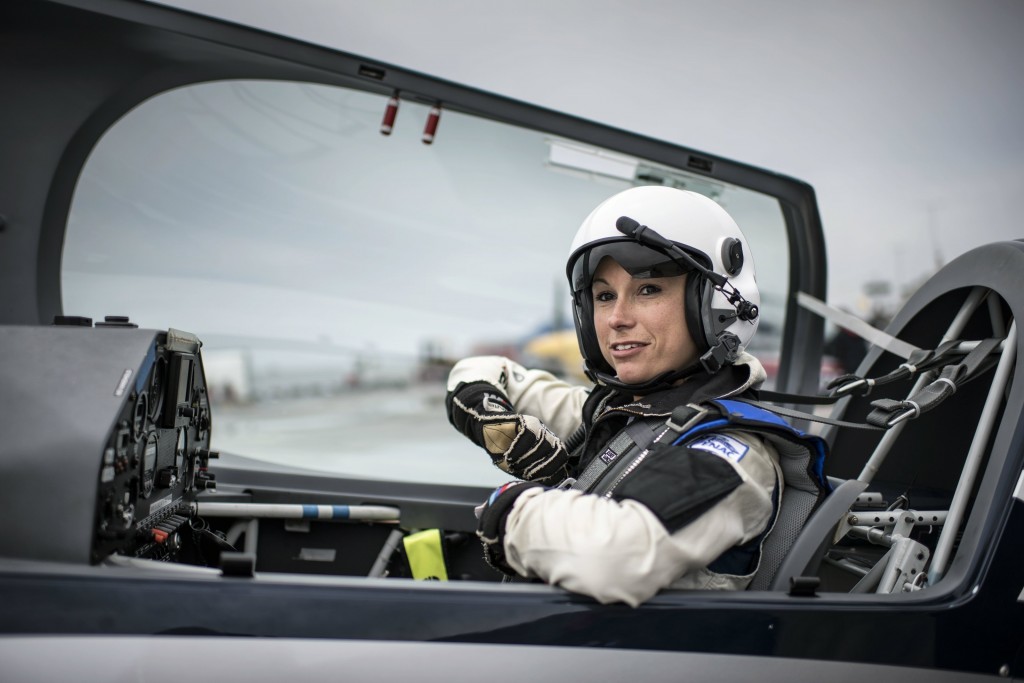 After school you worked in a gas station – what were those years like trying to keep your dream alive?

On quiet night shifts at the gas stations, I studied for my A-levels (Baccalauréat), which I finally obtained. During my spare time I worked for free at a flying club. I was doing secretarial duties, cleaning planes and volunteering for ferry flights, with a view to get 200 flight hours.

However, I was still faced with the problem of lack of finance. At the time the cost to enter a professional flying school was € 39,000. I applied for a scholarship from the French state, which at first was refused. On a second request I finally received a letter advising that they would finance 90% of the training, I felt like I had won the lottery.

You have said a lot of people helped you pursue your dream – who had the biggest impact on your career?

I’m very lucky to be surrounded by great people, who all have an influence on me. I could not name them all for fear of forgetting some, but they all know who they are.  I am very thankful for my sponsors – BMW, Grenoble airport, CETUP and the Raid Latécoère – I would not have got where I am today without them.

In a group, people may see me as a loner, but backstage I am surrounded by exceptional people. They are always there when I need them, and boost me up in the good and also the bad moments. They are my strength and my wonderful support.

Has it been tough being a female wanting to become a pilot?

Even in 2016, it is still not easy for women to persevere in a male dominated sport; you need a strong and determined personality to fit in. Aviation in France is a strongly male dominated activity. Only 7% of women have a pilot licence.

In aerobatics, there is quite a physical barrier as on the lower level planes, controls can be very heavy on some sequences. I remember spending hours and hours in the gym to have enough strength. If you are out of breath in the plane, you cannot concentrate, and concentration is so very important.

Then of course, as women, our sports career is shorter if we decide to start a family; pregnancy and having children is quite often the reason why some of us quit the sport.

What’s the biggest challenge you’ve had to overcome as a female pilot?

I find it sometimes difficult to get respected and treated the same as the men, even if sometimes it’s in the good way. As a woman I am often overprotected. For example, in my flying school when the weather is not great and I fly, I always get everyone calling me through the radio to tell me “watch out the weather is bad Mel”. When it’s a man doing the same, people don’t react the same.

There is also the physical difference, but that is more in aerobatics where you need to be very dynamic and explosive. It’s an advantage to be stronger in my opinion.

What sort of pilot did you initially want to become? Has it always been an aerobatic pilot?

As a little girl I wanted to become a fighter plane pilot. Later on, older and wiser, when I took my first flying lessons, and then joined the prestigious E.N.A.C. (Ecole Nationale de l’Aviation Civile), my aim was to become an airline pilot. I actually passed all the entry exams to enter Air France, but because of the airline economic difficulties, I am on their waiting lists for when they start enrolling again. In the meantime I am an airline pilot instructor at the E.N.A.C. in Grenoble. It was when I watched other pilots doing aerobatics that I decided to try it myself. My very first flight was a revelation, and aerobatics have now become a very important part of my life.

What’s the closest call you’ve had while doing aerobatics?

One day, I was training in an Extra 300. Some mechanical work had been done to the plane and the pedals had been badly put back the evening before. The plane command got blocked during a figure going down. Fortunately, I was a bit tired that day and an instructor was in the plane with me. From the front seat, he managed to unblock the pedal. Without this, I would not be here to talk about it. I was very frightened that day.

What attracted you to the Red Bull Air Race?

It seemed like the next obvious step for me, having always admired these wonderful pilots. I love the speed and the precision of the Red Bull Air Race, it is very different from aerobatics, which is more physical and technical.  I would say from my own experience, the two complete each other.

With the RBAR team, I have met great and genuine people. The training is safety focused, and the pilots fly in the best possible conditions all round. Also, I can’t hide the fact that being the first woman to take part in the Red Bull Air Race competition gives me a lot of pride, even if I would like people to watch me performing as a pilot and not as a woman.

What else do you want to achieve as a pilot – what’s your overall goal?

I will be focused this year on doing my best, first by going around the track safely and then bit-by-bit getting faster.

In my very first race, at Spielberg, I believe I did a good entry – flying fast and safe. While I finished with a very good time in the finals, I unfortunately hit a pylon in competition, resulting in a time penalty. Despite that Encounter of the Third Kind (film of Steven Spielberg!!)… I am pleased with my result, and I will definitely fight to be among the final pilots in Las Vegas.

What’s the best bit of advice anyone has given you? Who gave it to you?

“Never ever give up”, it doesn’t matter if you fall, the important thing is to know how to stand back up each time.

My favourite saying is “who dares wins”. I’m quite a shy girl but I actually like to challenge myself by daring to do what many people are afraid of doing. The more I challenge myself the further I go.

What would you go back and say to your 12 year old self if you could?

You see Mélanie, so far only you know that you have a big dream that seems unattainable. Adults around you do not realise how strong this feeling is going to grow. Life is full of ups and downs, but later on, I predict you will still have ups and downs but these will be in shiny planes drawing in the sky in aerobatics. What nobody knows yet, is that in 2003, a new race called Red Bull Air Race will start, and that there is a place for you there, little girl, and you will even make history by being the first woman ever to compete in it! Dream on…………. Smile on……….. Smoke On !!! 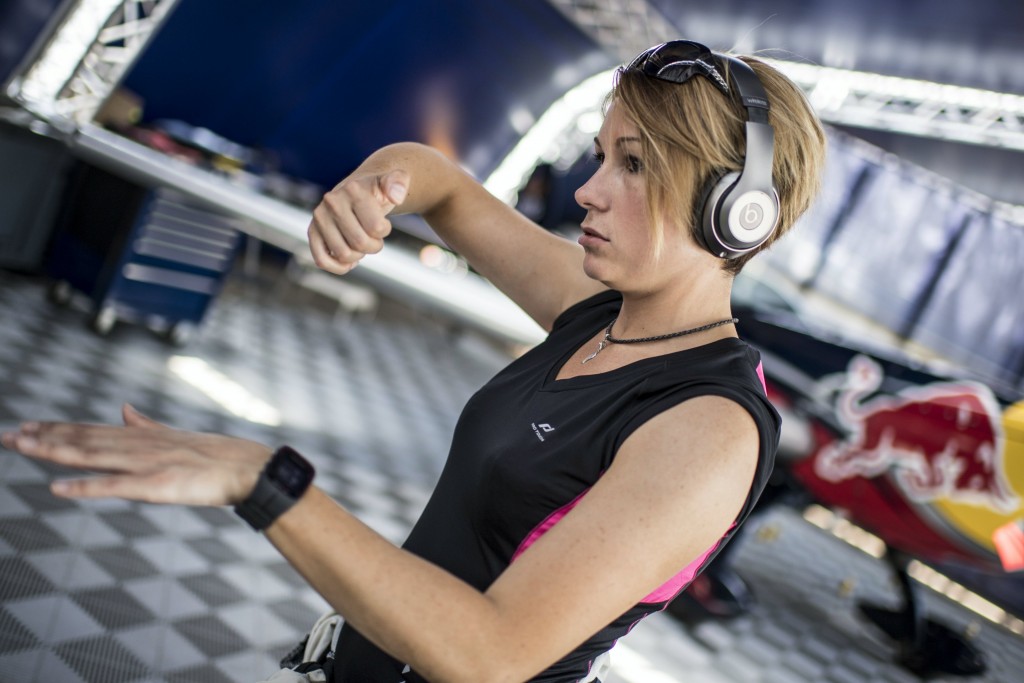