The 10 Next Steps for Women’s Rugby League

By Tarah Westera and Sam Squiers

More girls are taking up Rugby League but the sport still lags behind many other codes in its progression of women’s competitions.

The men’s calendar is consistent every year, fans know what time of year the ANZAC Test, Origin, Four Nations and Indigenous All Stars are on as well as the World Cup every four years. The Women’s isn’t as predictable nor consistent. Currently the women play their World Cup alongside the Police, Universities and Armed Forces teams. Making the Men’s and Women’s calendars mirror each other would help gain support and attention for the Women’s game. It’s a system that works well for other sports like tennis, surfing and cricket.

The Jillaroos World Cup winning side.

The women All Stars played the Indigenous All Stars as a curtain raiser to the recent ANZAC Test. While this was a huge move by the NRL, the gates to the stadium weren’t opened until the 7th minute of the 25 minute per half match. The girls’ friends and family were waiting outside the gates trying to get someone to let them in, while the girls ran out into a huge empty stadium, with no applause, no support and with only the sound of the rope hitting the flagpole echoing from the stands. What they had hoped would be a huge step in the progression of women in league turned out to be a really depressing moment.  Unfortunately it didn’t show them they were taken seriously enough to ensure the gates were open.

It would be great to see women’s games played as curtain raisers to all the big matches; Tests, Origin, Nines. It would also be a positive move to see those games played at a respectable time and publicised so that the public can see what women’s rugby league is all about, how well the girls play and the kind of entertaining football they’ll pull out.

The Jillaroos aren’t capped nor is there a record of who has played for the national side and how many games they played. Capping is an international term to show how many games they have played for their country. The current system doesn’t record how many games they’ve played nor their statistics in any way. Many of the girls don’t know how many tries they’ve scored nor career points.  It may shock many that the Jillaroos didn’t play with a coat of arms on their jerseys until the World Cup last year, with it previously only reserved for the Men’s team. Like the Coat of Arms, Capping is a simple thing to do, yet demonstrates to the Jillaroos they are being taken seriously and shown respect. 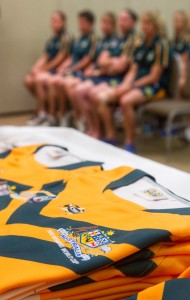 Last year’s World Cup was the first time the Jillaroos were able to have the Coat of Arms on their Australian jerseys.

The number of female rugby league players has increased 66% over the past 12 months. This is a huge spike. Like the boys, the girls have grown up following league and long to play just like their heroes. We need to make sure we cater for this increase and don’t lose them to other sports because of a lack of competition or pathway.

At the moment, the girls play with the boys up until Under 12s. It would be great to see girls’ leagues formed from as early as Under 8s to Under 12s and beyond. This would go a long way in attracting more girls to the sport. Currently many are turned off at the idea of playing with the boys or their parents won’t permit them to play with the boys for safety reasons.

Previously there were no girls’ competitions from Under 12s to Under 17s meaning many women were lost from the game due to a lack of opportunity. The NRL has, however, made huge in roads in this area over the last couple of years with Girls Under 14s and 16s competitions commencing in some areas across the country.

Establishing National Titles for all age groups is another positive move that will provide players with something to aspire to. It would be a huge step forward to see state representative teams playing other states in a national competition.

Organise High Performance Camps for talented rugby league players and stars of the future. Just like other sports do and just like the boys, give the girls their own camps where they can learn new skills, identify future talent and keep these girls in the game.

Even at club level, some of the women’s teams struggle to receive adequate support. A Jillaroo was recently telling me her club doesn’t help them with their competitions and the lights have been turned off midway through their game forcing them to abandon the match and scramble in the dark to pack up their gear. Another told of her club refusing to help or even open the kiosk and bar during their games for the spectators. If the NRL takes its women’s team seriously, this will hopefully help it filter down to the club level. 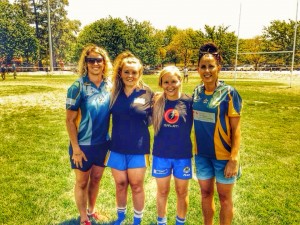 To make all this happen, the NRL needs to invest more money and staff. Investing in women and women’s rugby league is investing in the competition’s future – don’t think of the short term but the bigger picture. Women play footy, the more footy they play as kids, the bigger the interest. The bigger the interest, the more bums on seats. The more bums on seats, the more popular and inclusive it becomes. That passion from both sides of a family is invested in their kids and so on and so on.

Invest too in the Jillaroos. The last World Cup was the first time the girls had their travel and accommodation paid for by the league. This was a huge step by the NRL, it now needs to continue this support for all international events and build on that investment every year. Many of these women have families to support but take unpaid leave to represent their country, they’re not asking for much, but it would make a big difference.

Rugby Union has the money, travel and Olympics that are all huge factors that are luring some of our best players. Jillaroo Emma Tonegato was signed to Rugby soon after the World Cup win and there will be plenty more if the NRL doesn’t make changes that will show them our national league teams are being taken seriously. 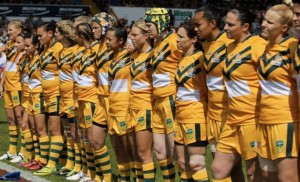 The Jillaroos before the World Cup Grand Final in England

There are some great options open for assistance for women’s sport from the government that should be explored. Cricket Australia has received the Women in Sport Media Grant (WISM) annually from the Australian Government since 2010. This enables them to pay for a full-time media manager for their national women’s cricket team, The Southern Stars. It also pays for media training, production of highlight reels, promotional material and interviews that can be given to media outlets even when they’re overseas playing.

To give you an example, the Jillaroos and the Southern Stars each won a World Cup in 2013.

To help formalise and facilitate women’s rugby league and its national team, a separate women’s board, filled with the right people, is needed.

There are many retiring Jillaroos who have so much experience and passion for Rugby League, this would be a great avenue to keep them involved in our game and continue to receive their leadership well into the future.

This is a wish list and by no means is this expected to happen overnight. But change does need to happen to make sure Women’s Rugby League keeps developing and progressing. Many of these points can be implemented easily and would go a long way to improving the future of the game for women and for the NRL.